Headford is located approximately 26km north of Galway City and 20km west of Tuam ensuring ease of access to the wider range of service provision in both of these areas.  The town straddles the county boundary with County Mayo and it is strategically located along the National Secondary Road, the N84 which provides good transport links between Galway and Mayo while also acting as the main vehicular gateway to the town.

The landscape, topography and natural features of the area have influenced the pattern and form of development of the Town over the years. The rural character of the surrounding landscape, rich heritage and its proximity to Lough Corrib, provide many amenity opportunities for the Town. The town is situated south of the Black River which is the county boundary with Mayo. It is an angling centre for the eastern shore of Lough Corrib, and Greenfields, some 6.5 km west of the town, is its boating harbour.

The centre of Headford is characterised by its cohesive development as a predominantly 19th century commercial market Town, laid out as a planned settlement in relation to the landlord’s mansion, Headford Castle and its demesne.

Residential land supply in Headford is located to the north and east of the town centre with smaller plots to the south. There is also significant supply of infill sites zoned for residential use /opportunity sites in the town centre.

In terms of education, Headford has two primary schools, Scoil Breandain Naofa (Boys School), is a Senior boys school comprising of four classes of boys from third to sixth class. Scoil Mhuire na Dea Chomhairle (Girls School) adjoins the boy's school.  The Girls school accommodates boys up to second class. Headford has one of the largest secondary schools in the county, with pupils travelling from a wide catchment area for secondary education in the co-educational Presentation Secondary School.

Headford has some well-developed community and recreation facilities throughout the town including the schools, a library, credit union, a children’s playground, churches and graveyards, medical facilities, Garda station, bank, post office and a number of sport pitch. These facilities are predominantly located to the west of the town.

Headford’s centre runs from St. George’s Square at the eastern end of the Town to St. Mary’s Roman Catholic Church to the west and this area has been the focal point for the Town, playing a pivotal role in the administrative, commercial, cultural, recreational, residential and community functions of the Town. The town is laid out as a planned settlement in relation to the landlord’s mansion, Headford Castle and its demesne. The domestic and commercial buildings themselves are, in most part, of a simple vernacular style, counter pointed by the neoclassical architecture of the public buildings.

The designation of the historic town centre as an Architectural Conservation Area and the associated management of both individual buildings and the public realm in that area will significantly enhance the quality of the local environment within Headford. The principal significance of the designated ACA lies in its development as a predominantly 19th century settlement. There are a number of protected structures located within the Headford Plan area, examples includes St. Mary’s Church and St. John the Baptist Church. Landmark buildings, such as the former Catholic Church in the core of the Town continue to contribute to the urban streetscape.

Headford Demesne is an example of a designed landscape within the plan area. It was part of the estate owned by the St. George family until its dissolution in 1892 by the Land Commission. It contained a manor house, outbuildings, ornamental gardens, parkland and woodland, much of which is lost. The most remarkable features to survive are the high stone walls that surrounded the many gardens and the demesne itself. These are a significant feature in the landscape and contribute to the character of Headford.

Headford also has a rich archaeological heritage, with a number of recorded monuments, providing evidence of early settlement in the area.

The various streams and rivers such as the Headford River and the Annacurta Stream in the plan area function as ecological corridors before they drain into a designated site – Lough Corrib SAC, pNHA & SPA. Trees and hedgerows are also of high local biodiversity value and contribute to ecological connectivity.

Headford has been designated as a Small Growth Town (SGT) in the Settlement Hierarchy for the County.  Headford provides a limited amount of local employment and services to the people of the Town and those within its hinterland and the plan will seek to support the development, vitality and vibrancy of the town.

Due to its proximity to Galway City, Headford serves as an important commuter town but it also has the potential to become increasingly more self-sufficient by the creation of employment opportunities, while still accommodating small scale and start-up businesses.

There is a small local employment base through its retail provision, services and modest industrial/enterprise sectors. Headford has a limited industrial and enterprise base.

The promotion of economic development and employment creation will be appropriately guided to ensure the protection of residential amenities, built and natural heritage, landscape and streetscape, character of the town and the vitality and viability of the Town centre.

The town centre area remains the primary focus for the location of new retail development, with opportunities to develop this sector in a consolidated and sequential manner. The development of any future retail and non-retail services in the town needs to be carefully planned, designed and managed in order to protect and enhance the town’s unique character while promoting the economic vitality of the town centre and providing a strong base for employment opportunities.

A number of opportunity sites have been identified within the Town Centre and outlined in policy objective HSGT 12. Each of the three sites have a distinct quality and character and plays a key role in the sustainable functioning of the overall town and the town centre.

Tourism is an important sector in the local area, as a driver of the local economy as well as a mechanism for the preservation and enhancement of local heritage. Headford and its surrounding area have a significant number of tourist attractions focussing on water-based recreation, its natural heritage, it’s archaeological and architectural heritage, while nearby Ross Eirilly forms part of the driving trail of the Ecclesiastical Heritage Sites in East Galway.

The Headford Lace Project won the 2017 Tidy Towns Heritage Award as the judges from the Heritage Council were particularly impressed by the innovative and creative approach taken by the project which began following Headford’s involvement in the Galway 2020 ‘Small Towns Big Ideas’ pilot project.

The tourism aspects of Headford remains largely undeveloped, which also presents a significant opportunity to expand and promote the tourism base of the area, particularly given Headford’s close proximity to Lough Corrib and heritage sites such as nearby Ross Errily.

Headford receives its water supply from the Tuam Regional Water Supply Scheme which is abstracted from Lough Corrib at Luimnagh. In this regard, public water supply is not a limiting factor for development.

The town is served by a municipal wastewater treatment system and there is capacity within the network to accommodate development that is envisaged to take place.

Headford is strategically located along the National Secondary Road, the N84 which provides good transport links between Galway and Mayo while also acting as the main vehicular gateway to the Town. The regional roads are also important links to and from the Town. The R334 enters the Town from the north-west and provides good links with Cross and West Galway while the R333 is the western approach road and connects up with the N83 National Road the M17 Motorway west Tuam Town.

Public transport in Headford is limited to bus services, consisting predominantly of local services which play a vital role in connecting Headford to Galway and Headford to Ballinrobe and Ballina.

With respect to lands within the village that are liable to flood risk, the Council will require any proposed developments to comply with ‘The Planning System and Flood Risk Management Guidelines for Planning Authorities (DEHLG, 2009) and Circular PL2/2014 and any amendment thereof.  The Council, having regard to the nature and scope of development, may require the submission of Flood Risk Assessments, as appropriate, to assess the suitability of development proposals. There is a flood map identified for Headford and it is in accordance with the guidelines and circular referenced above. 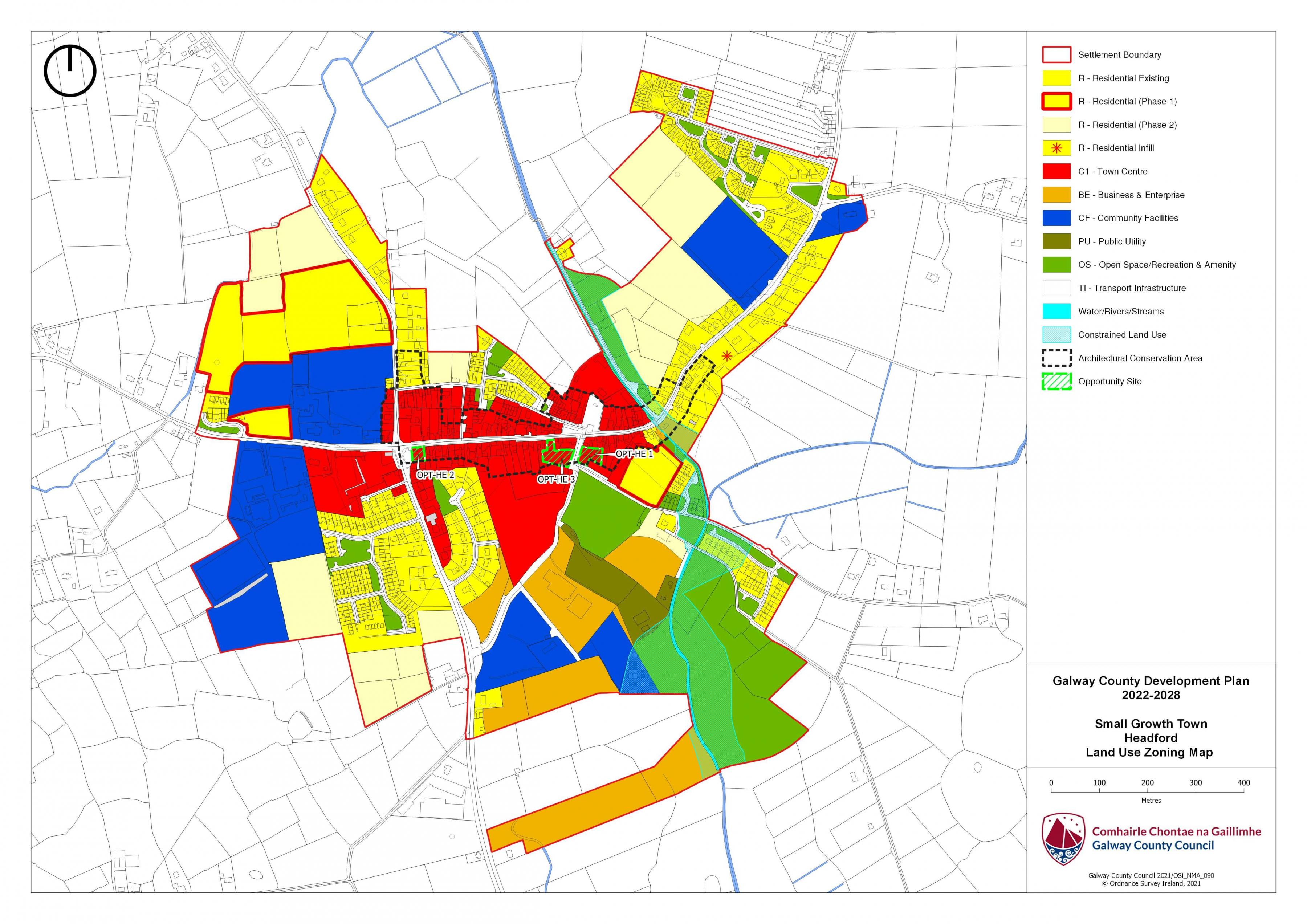 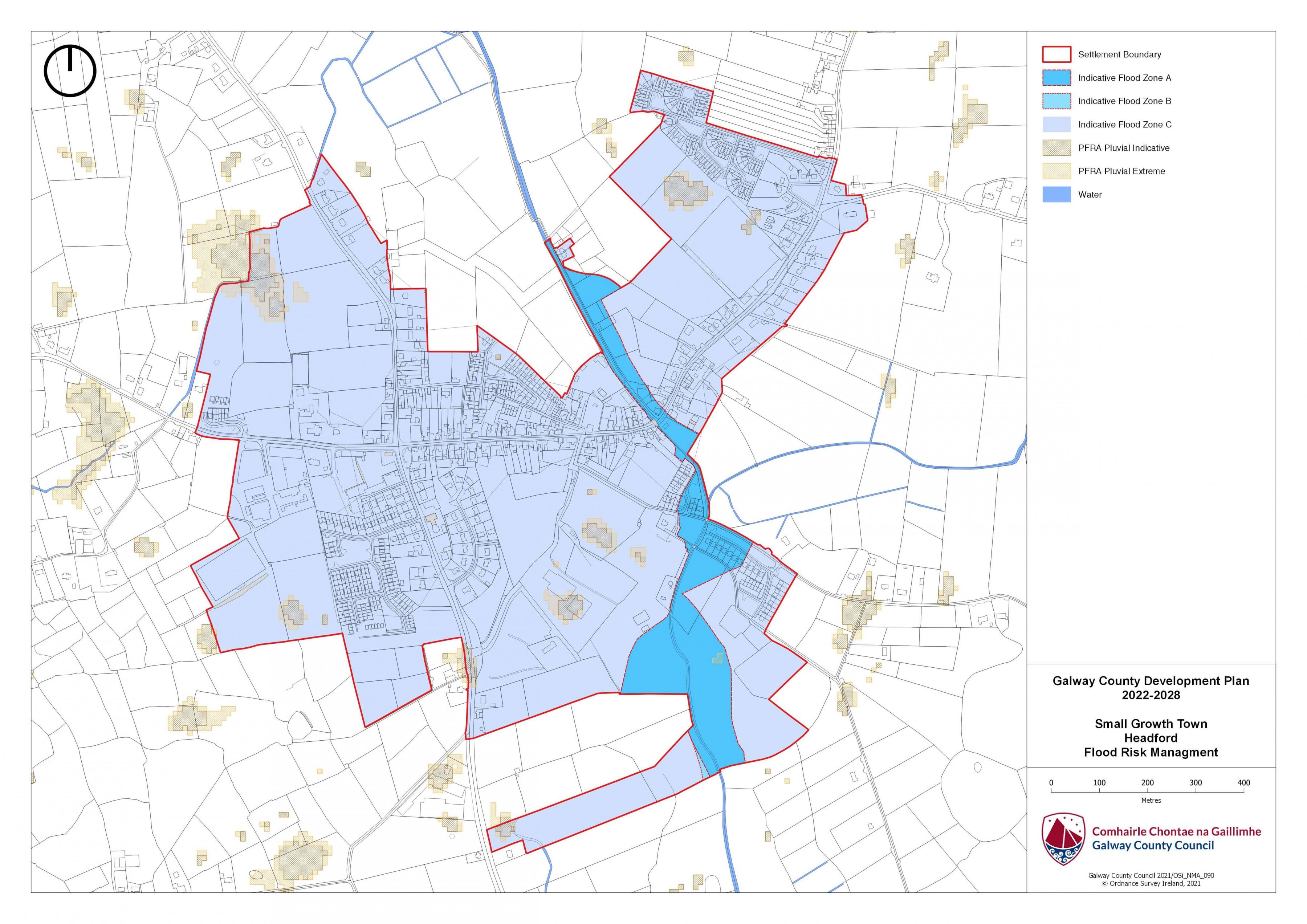 86 submissions have raised observations relating to this chapter