The R362 regional road linking Dunmore on the N83 with the M6 at Athlone and the R364 regional road connects Moylough on the N63 to near Ballymoe on the N60.  The village crossroads is still well defined in Glenamaddy today.  The village of Glenamaddy dates to the early nineteenth century, however there are numerous Recorded Monuments in the area which include ringforts, which suggest settlement in this location over a longer period of time.

The surrounding hinterland is characterised by a mix of agricultural use with one off housing peppering the regional roads from the village centre.  There have been some new larger housing developments in Glenamaddy over the years including Dudley Heights and O’Keefe Park to the south of the village core and Lake View estate to the east of the village. On balance, a healthy variety of dwelling types and sizes is provided within the plan area.

The settlement would benefit from some regeneration of existing properties within the village core. New developments should be well integrated with the existing village and allow for easy and safe access to the centre and main facilities by foot and bicycle.

Continued renewal of properties within the Village Core would be desirable and a high standard of design for infill housing development and new or replacement shop-fronts should be in keeping with the overall character of the main street.

It is also important that the village’s rural character, heritage and natural amenities are maintained, enhanced and not compromised.

Glenamaddy is served by a range of existing community facilities.  These include schools, St. Patricks church, hotel, health centre, retail outlets such as Supervalu, Bakery, creche, Garda Station, veterinary clinic and community centre as well as a post office along with other commercial entities.

The Glenamaddy Community Playground, Collins Park, is located to the south of the village. It provides a playing area with equipment and associated playing fields.

The core area has been designated an Architectural Conservation Area.  Glenamaddy is an attractive, well laid out town. The development of the village dates back to the 1820s when a church was erected and a market established.  The first edition Ordnance Survey Map c1840 shows dispersed housing lining the approach roads and a Police Barracks on the Creggs Road. Glenamaddy workhouse which was located in the eastern outskirts of the town opened in 1853.  The village prospered and grew with the advent of markets and fairs, increased trade and the addition of further buildings including the market weights store was built c. 1900 to hold the weights used with the tripod scales on market days in Glenamaddy.

St Patrick's Catholic Church which was dedicated in 1904; replacing the earlier church that stood in the grounds of the local graveyard. In 1909 St Bridget's Town Hall was built and has played an important role in the cultural and social life of the community ever since.

The low-lying and gently rolling landscape around Glenamaddy is largely agricultural. It has a mosaic of green fields, wetlands, raised bogs and pockets of coniferous forestry and is underlain by limestone. There is a large turlough on the eastern edge of the town and is part of a large turlough and bog complex called Lough Lurgeen Bog/Glenamaddy Turlough SAC. There is a small lake on top of the bog and a stream flows from the lake, through the bog and into the turlough. This unusual feature is unique to this bog.

Glenamaddy is one of the significant villages in north-east Galway with a good range of services and facilities.  The village core evolved around the crossroads of the R 362 and the R 364 which still contains the majority of commercial outlets serving the village today.  The four roads leading from the centre of the village define the streetscape and comprise primarily of two storey buildings.  A small number of the buildings have a subservient habitable third floor.  Blue or black slate and tiles are the predominant roof materials with the exterior walls of the buildings having a nap plaster finish.  Some properties along the main streets have front gardens, but predominately the residential units are fronting the adjoining footpath.

There are currently two bakery suppliers located on the R 364 to the south of the village centre.

The village is served by a public water supply. There is capacity in the network to accommodate development that is envisaged to take place.

The village is served by a municipal wastewater treatment system. There is capacity within the network to accommodate development that is envisaged to take place.

With respect to lands within the village that are liable to flood risk, the Council will require any proposed developments to comply with ‘The Planning System and Flood Risk Management Guidelines for Planning Authorities (DEHLG, 2009) and Circular PL2/2014 and any amendment thereof.  The Council, having regard to the nature and scope of development, may require the submission of Flood Risk Assessments, as appropriate, to assess the suitability of development proposals. There is a flood map identified for Glenamaddy and is in accordance with the guidelines and circular referenced above. 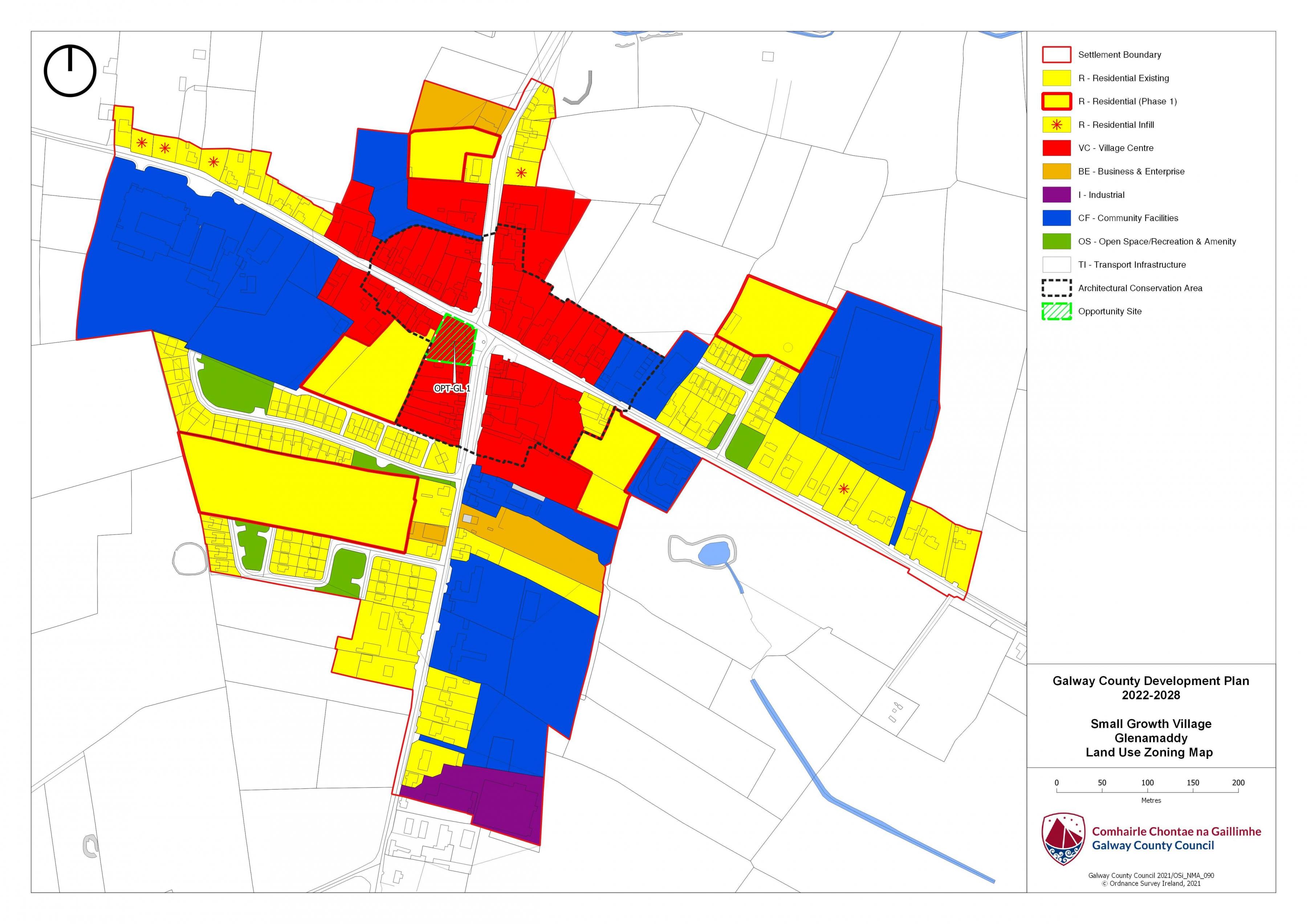 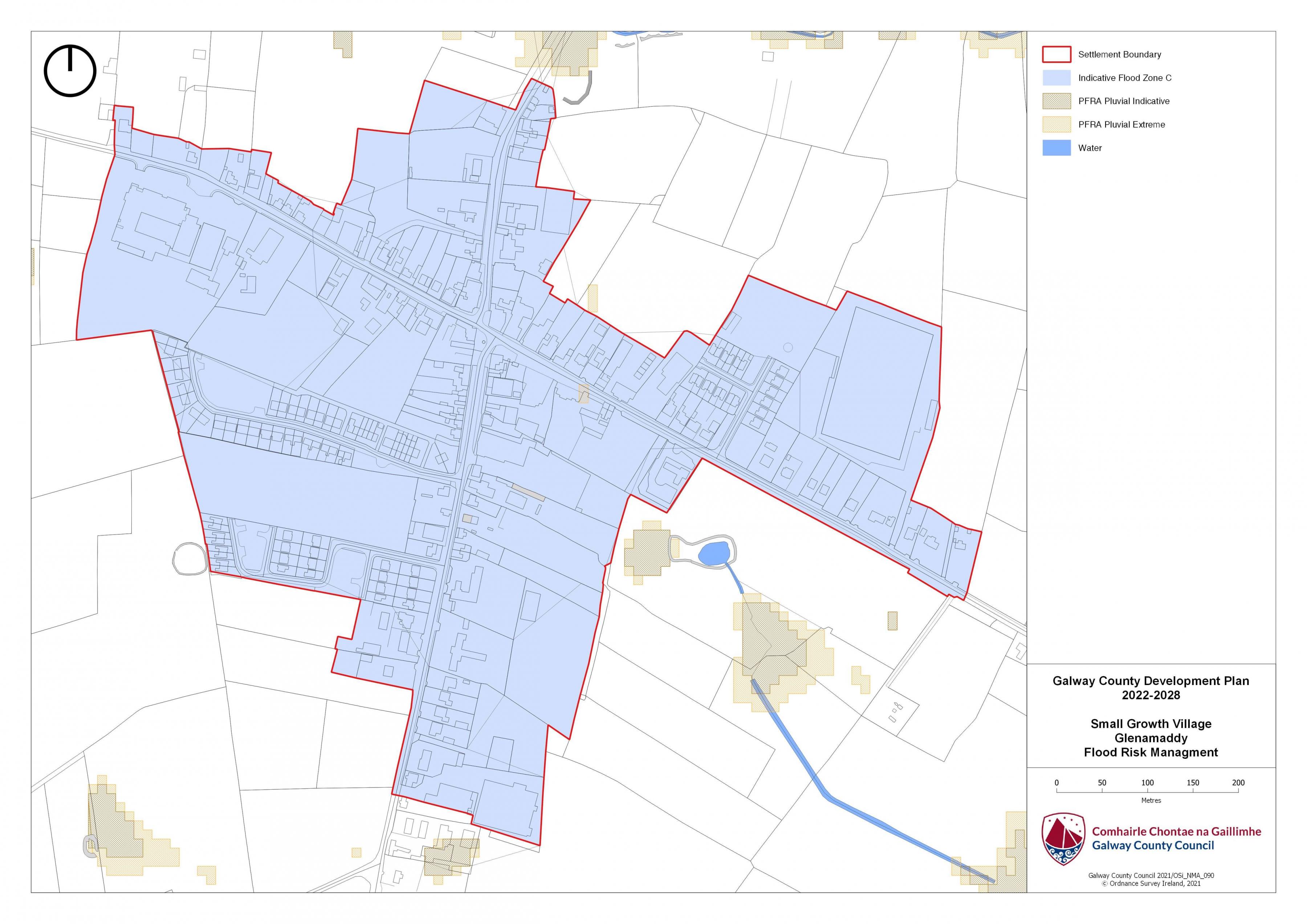